On the surface I appeared calm, steady, normal.  Beneath that I was waiting for a tiny reason to tear him a new *ssh0le.  Late night make outs  began to sour rather than stimulate.

Love Doesn’t Just Die.  We Kill It Most of the Time.  I am not a COMPLETE psycho, but love on life support can make a person feel like one.

I was young and in love, but from where I stood he was less and less interested in me.  Disenchanted is the word I like to use.  He would look at me with contempt,  he seemed too jealous and suspicious of me.  Me?  Lil’ ol’ me with the bright smile and prudish upbringing.  Me – who believed God would strike her down for having premarital sex and instead developed mad skills at a few Lewinsky-style relations.  Me?  The gal who wanted nothing but to spend all of her time with him?   Me?  The gal who wanted to marry him.  Me?  Suspicious of ME?  Blind, loyal, devoted me?  You don’t want to talk to me about it?   Pardon moi –  oh, I DID hear you right, you WOULD rather go clubbing than to sit with me at my grandmother’s wake.  You’re too chicken to end it?   Oh, allow me, it is my pleasure. Not only is this chicken done, but I used its skin and bones for stock and have composted it all for you too.  Sorry, there will be no turning back.  Oh, you’re sorry?  Oh, you DON’T want to break up?  Oh I misunderstood you?  Do I still love you? Sure – last week I did.  Yeah, sorry.  You should have thought through the ‘Stupid Boyfriend Playbook’ before I pulled the plug.

So he’s cheating on me, you say?  Oh, with her?  HER- that girl sitting right in front of me whose desk seat I need to kick with increasing intensity with every swing of my crazy angry sixteen year old betrayed leg?  Go for it.  Have her.  In fact, take everything you ever gave me back with you before I burn it in my parents’ house.  My mother brushed my hair with her hand looking at the pile of classic high school boyfriend presents in my room: stuffed toys, sweaters, a watch, stupid souvenirs, even a bracelet I think.  She kissed the top of my head and said, “Good girl.”  She practically sealed and shipped the box for me.  If I wanted to burn it, I do believe she would have handed me the lighter fluid after having the box brought to the empty lot across the street.   We could watch the remnants of my first relationship burn from the patio after dinner while eating dessert.  The scene plays well in my head.  In reality his crap was delivered to his front yard by a common friend who had the lucky task of giving him the disapproving head shake.  “What am I supposed to do with all of this?!?” he exclaimed.  My one regret after killing that courtship was that it was so civil.  I wanted to see something go up in flames like my feelings for him. 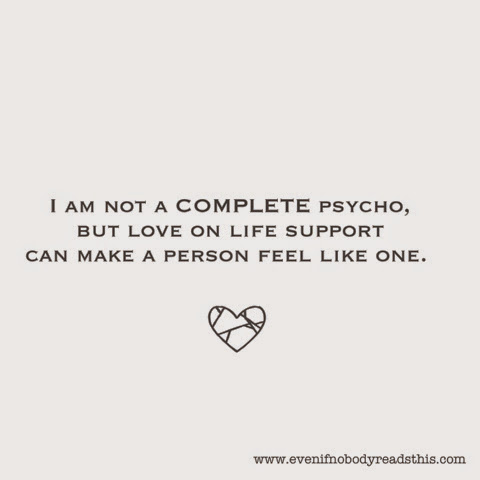