It’s not so much what you dream about doing as it is what you are willing to endure to carry on with it.  Last week I read this post by Mark Manson discussing the seven questions to ask when contemplating one’s life’s purpose.  His first question,  WHAT’S YOUR FAVORITE FLAVOR OF SHIT SANDWICH AND DOES IT COME WITH AN OLIVE? stuck with me like gum in my hair.  Impossible to shake off and always there, my fingers fiddling with it in the morning and at night while in bed.  I do not know what my favorite shit sandwich flavor of all time is, though I have had my fair share of them in different areas and at different times in my life.  I do not prepare my shit sandwiches with olives though.  I hate olives unless broken down into a tapenade. Mr. Manson perceives the olive as a garnish, saying that if you are going to eat a shit sandwich to get where you need to go or to get what it is you need, it may as well be for something you really really want.  It has to be worth it.  I see the olive as the devil’s advocate, “Are you sure you’re willing to eat this shit sandwich because this added olive might just send you over the edge, kid!”  So I’d better think hard and fast about these shit sandwiches because the best things in life aren’t only NOT free, but you do need to go through a lot of crap to get them.

When I finally moved away from my parents’ house halfway across the globe in my twenties, I was willing to eat a shit sandwich of the “no monthly allowance after one year even if that means picking up an extra odd job” and “find a roommate off of Craigslist” variety.  Even if the shit sandwiches for being independent tasted like leaving my friends behind, homesickness, humility, uncertainty, strict weekly accounting, a pointless second job under the supervision of a sleazy boss and endless jabs of judgement from my sister,  I was willing to keep eating them because I knew that those shit sandwiches were my key to cutting the umbilical cord.  Some people’s shit sandwiches taste like missed weekends with friends, carpal tunnel syndrome, 2 hour commutes, early morning burpees, and late night researching.  Other shit sandwiches taste more like  unsold paintings, manuscripts full of red lines, cattle calls, staffing that continually turns over, filing small business taxes at a loss,  and working through the holidays. 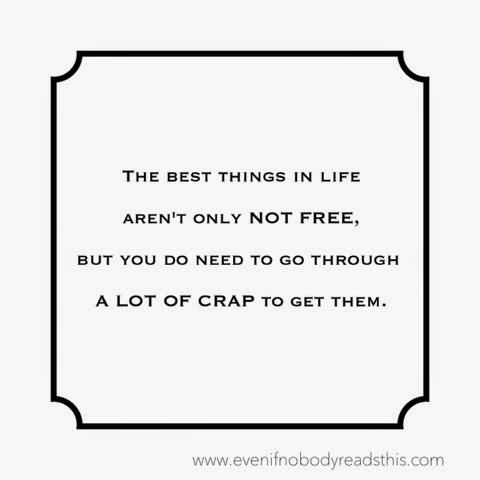 My shit sandwich currently tastes like several posts being written simultaneously over several hours, none of which interest me by the time I am supposed to be done.  My shit sandwich tastes like crickets.  Crickets that you hear when there is absolute silence in your surroundings, because my head is empty.  The olive is coming back to it time after time and eventually coming up with something I like. The taste of that shit sandwich is too familiar and not too exciting.  Let me be honest.  I am not trying hard enough to fail.  Therefore, I do not have a true shit sandwich in my lunch bag.

I do not know what kind of shit sandwich I am willing to eat to become a published writer because I frankly I am still too under confident to line up at the deli counter to order one.  Heck, I have yet to read the menu.